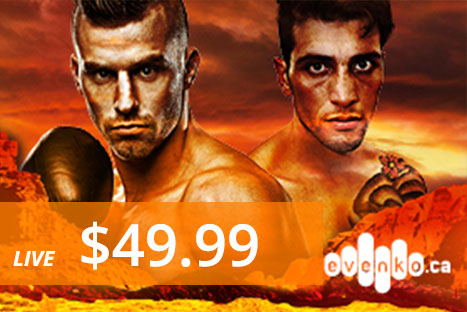 The Montreal slugger David Lemieux (35-3, 32 KOs) will be back in the ring at the Bell Centre on Saturday, October 22 in the gala “Blood, guts and glory” presented by Eye of the Tiger Management, Golden Boy Promotions and InterBox in association with evenko and Videotron. He will cross swords with the Argentinian Cristian Fabian Rios (21-7-3, 6 KOs) in a 10 round duel in the middleweight division.

Lots of action is in store at the semi-final, with Steven ‘Bang Bang’ Butler (17-0-1, 14 KOs) facing canadian Janks Trotter (10-3-1, 10 KOs). At only 20 years of age, Steven “Bang Bang” Butler is quickly making a name for himself throughout the World.  Ranked at #10 in the World junior middleweight division (154 lbs) by the IBF, Butler has all the qualities to not only become a World champion, but also to follow in David Lemieux’s footsteps by becoming highly marketable and recognized all around the World. The current IBF Youth champion has already boxed in the Main Event on several occasions, wowing all fans with fantastic footwork, great combinations, raw power and great precision. Butler returns to the Montreal Bell Centre for the first time since January, when he beat a very game Antonio Hoffman (13-1-0,9 KOs) by UD in one of the best bouts presented as part of the Pascal vs. Kovalev undercard. His opponent, fellow Canadian Janks Trotter, is a dangerous puncher with a KO percentage of 100% in 10 wins. Our advice to fans is not to blink during this interesting all-Canadian matchup, as both big punchers have proved their power and both can close the fight very quickly.