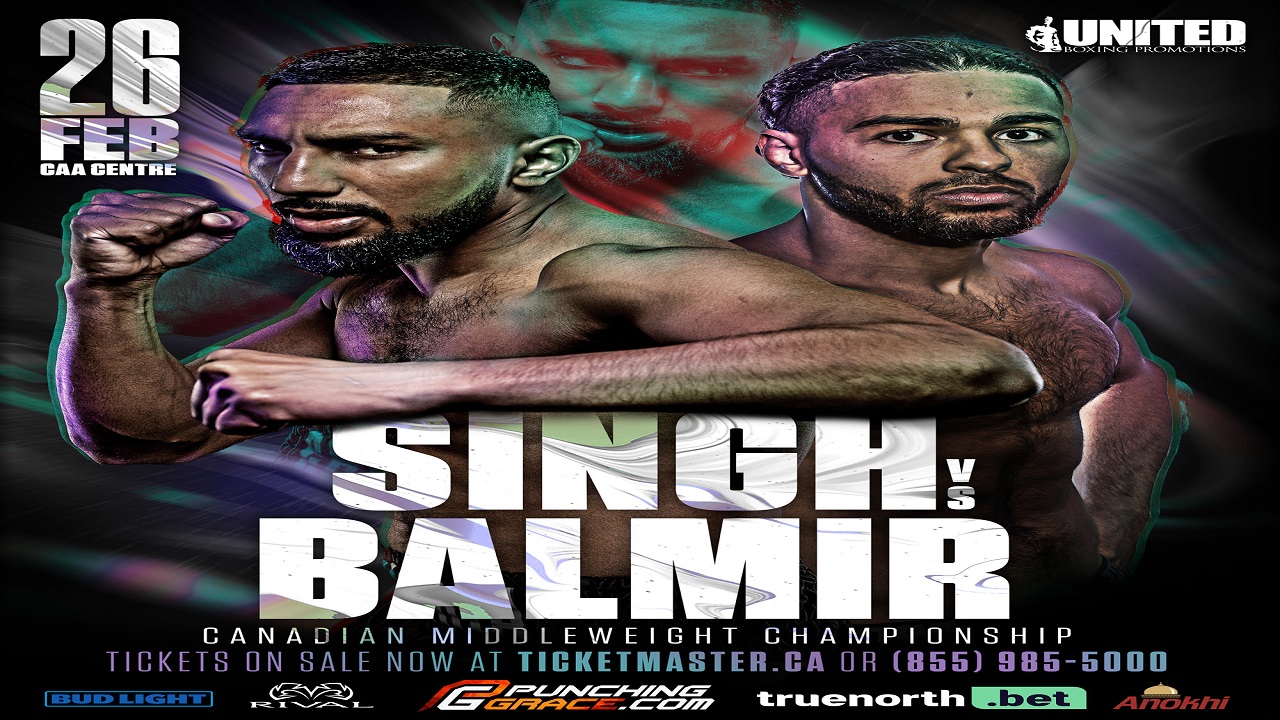 On Saturday, February 26, United Boxing Promotions begins its partnership with Punching Grace with a championship fight that boxing aficionados have been clamouring for. This event, which will take place at the Brampton CAA Centre, will showcase the undefeated Sukhdeep Singh Bhatti (9-0-0, 3 KOs), who will take on Jordan Balmir (11-1-0, 6 KOs) for the Canadian middleweight title. Furthermore, Josh Wagner, Mark Smither, Mponda Kalunga, Joshua Frazer, Cody Kelly, Tyler Pouli, Ricardo Brown and Emmanuel Ankama will share the spotlight at this event, simulcast on Punching Grace.

“Showcasing Singh-Balmir as the first event under the United Boxing Promotions-Punching Grace agreement is exciting for everyone involved. Singh is undefeated, a fan favourite and perhaps the best middleweight prospect in Ontario, and Balmir is a fighter that everyone wants to see every time he steps into the ring or cage. This is what Canadian boxing needs: more all-Canadian showdowns, and this fight is a perfect example of the vision that we had when we teamed up with Punching Grace,” said the president of United Boxing Productions, Tyler Buxton.

Sukhdeep Singh gets back into the action only a few months after defeating Juan Carlos Raygosa. This will be the first championship fight for “Chakria”. Singh is risking his perfect record in his fight against Balmir, and is thrilled to do battle once again on Canadian soil. “It’s an honour fighting for the Canadian title. This nation has provided me with a great sense of belonging and every time I step inside the ring, I feel obliged to show my gratitude for such an opportunity. Balmir is clearly an established boxer with a record to be respected. I am ready for it and I will be at my best,” asserts Sukhdeep Singh Bhatti, who is a native of India.

Jordan Balmir is a more seasoned boxer, as this upcoming bout will be his 13th pro fight. The native of Drummondville won his first ten matches before losing to Steven Butler, one of Eye of the Tiger’s headliners, in a championship fight. Balmir showed that he was once again in fighting form by defeating Omar Andrade on January 25. Says Balmir, “It feels great! Fighting for any title makes you excited, but especially for this one because I was born in Canada and I am proud to represent the country and will be proud to defend that title! It won’t be an easy fight and I am preparing for this. I will make this match very uncomfortable for him. Sukhdeep is a really good opponent, but he bleeds, just like me, so may the better man win.”