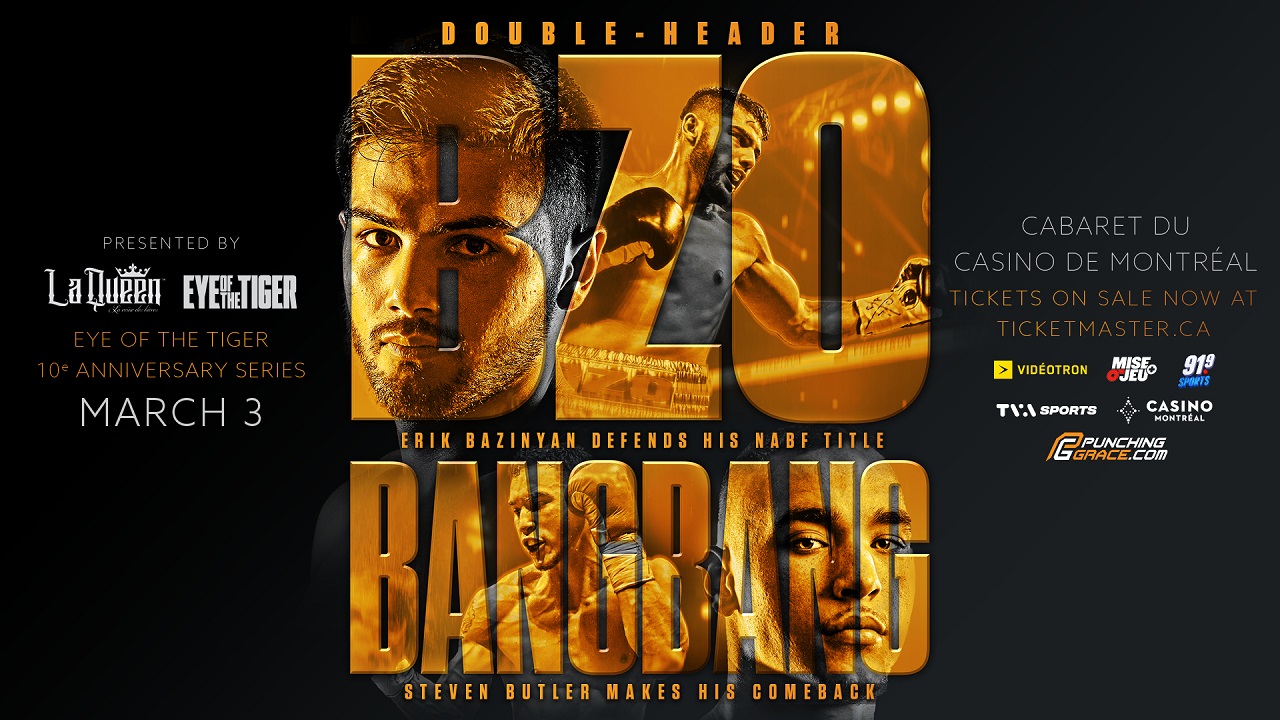 Eye of the Tiger continues its 10th anniversary series at the Casino de Montréal with the long-awaited return of Erik Bazinyan (26-0-0, 20 KOs), contender for the world title. “BZO” will confront Reinaldo Paniagua (17-1-0, 16 KOs) in the main event in a championship fight with the NABF super middleweight titles at stake. Steven “Bang Bang Butler” (28-3-1, 24 KOs) will re-launch his career back home in Quebec against Hector Manuel Zepeda (20-3-0, 6 KOs). Also featured on this card will be top prospect Steve Claggett, Christopher Guerrero, Hamza Khabbaz, Martine Vallières-Bisson and Jean-Gardy François.

Bazinyan, Marc Ramsay’s protegé, is ranked 7th in the world by the WBA, 8th by the WBO, and 16th by the WBC. Paniagua was hand-picked by Marc Ramsay’s team to challenge Bazinyan in a fight that will give him the tools for the challenges to come in 2022. A decisive win against Paniagua would allow him to move up in the world classifications. An aggressive hard-hitter, Paniagua will force Bazinyan to focus throughout the fight and never let his guard down.

“Paniagua has an impressive collection of KOs and he’ll be a great challenge for Erik, but we’ll really be watching how Erik reacts to a heavy-hitter who also is trying to move up in the world classifications. This duel will prove to be a great start to a year filled with challenges for Bazinyan”, explains Antonin Décarie, EOTTM general manager.

Following his heartbreaking loss by KO in January to Jose de Jesus Macias, Steven Butler hopes to give a flawless performance to kickstart his career and start ascending the world classifications. “Bang Bang” will face Hector Manuel Zepeda, a boxer who has confronted worthy contenders such as ex-world champion Carlos Molina, and Sebastian Fundora. Zepeda will come to the Casino de Montréal with the firm intention of causing a third consecutive defeat to the Quebecer. “Bang Bang” knows that he is working with a very slim margin of error and he has every intention of emerging victorious from this fight. “I want to get back to the top and in order to do that, I know that I have to knock out fighters like Zepeda. My team and I worked really hard in training camp so that I can win on March 3”, explained Steven Butler.