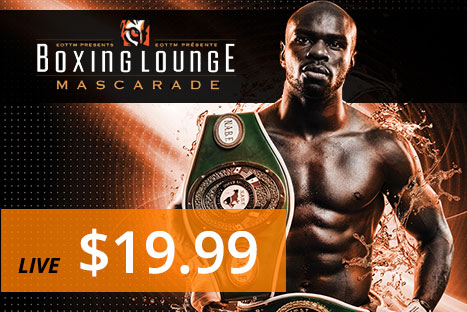 Eye Of The Tiger Management (EOTTM) will launch its new Boxing Lounge Series with a strong top-to-bottom card, which will be available to watch worldwide as a $19.99 PPV event being streamed in high-definition via this website.  Maduma vs. Aparicio will be the 10-round main event and world-class welterweight Antonin Decarie (28-2, 8 KOs) faces Cesar “El Dolar” Chavez (21-5, 9 KOs) in the eight-round co-feature.

“This series is made to be seen on the screen in HD,” EOTTM president Camille Estephan explained.  “IPTV is the future in terms of watching entertainment.  Our series is old school boxing with cigars, Scotch, tables and seats for 500, in an intimate environment.  It really looks great on the screen.  PunchingGrace will bring real-life boxing to viewers.  They’ll be close to the action in the ring, as well in the back area before and after fights.  It is available worldwide and we’re also developing a network of bars around the world to take it.  We’re very excited about this undertaking.”

“This is going to be a big year for me,” Maduma said.  “Everything is in place for me to accomplish my goal of becoming world champion.  First, though, I need to take care of business with Aparicio, a tough Mexican veteran with a lot of experience.  I never look past one fight to another.

“The lightweight division is exciting but lacks a big name right now.  Our division has a lot of good fighters and I plan to emerge as the lightweight champion of the world.  I have all the tools to dominate opponents and I’m gaining the experience I’ll need to beat the very best.”

“Ghislain has blazing hand speed, power and accuracy,” commented Estephan, who promotes Maduma.  “He’s explosive and always in top condition.  He wants to win the world title this year and that’s our plan. Ghislain has always been a very special talent.  He was a young father at 18 and has three children.  As an amateur, all he did was work, go to school and compete in tournaments.  He didn’t have time to train back then.  Ghislain, like all of our fighters, now does extensive strength-and-conditioning workouts at highly-respected Centre Claude Robillard alongside Canadian Olympians.

“There are always doubters in boxing.  They doubted me when I talked about (EOTTM stable-mates and world title challengers) Bermane Stiverne and Dierry Jean.  They’re missing the boat with Ghislain, too.  Not only is he going to be a world lightweight champion, he’s going to be the No. 1 lightweight in the world and a major headliner.”

“Boxing Lounge” also features Decarie, the popular Quebec boxer who is rated No. 11 by the WBC.  Decarie’s last fight was this past September, in which he won a six-round decision versus Salim Larbi (17-3-2), after dropping a 10-round decision to Luis Carlos Abregu (34-1, 28 KOs) last April for the vacant WBC Silver Championship.

“After Antonin’s loss to Abregu,” Estephan noted, “he came back to fight a bigger opponent, Larbi, who is really a light middleweight. Coming off a loss, Larbi was a very tough opponent, and a good test for Antonin. He will face another good test in this upcoming fight so he can get back into world title contention.  He’s not too far off right now.  Adjustments have been put in place so that he’ll be ready to take advantage of his next opportunity to get a world title shot.”

All opponents will soon be announced.  All fights and fighters are subject to change.

The Feb. 5th show is a private event that is already sold-out. Tickets are not available to purchase but fans all over the world may watch all of the action live, here.